Wandering around the British Virgin Islands

Since completing the Rally we spend a few days getting the boat back in order and as always – there remains a few items on the to do list that need attention.

Our crew member Jean was scheduled to fly back home on Thursday Nov 24th so we took the opportunity to do a quick whirl around the BVI’s. We started with our first swim in the 84F waters with a snorkel around the wreck of the Mail Ship Rhone which sank trying to get sea room in a hurricane in Oct 1867. The sky was completely overcast so visibility was not great but the swim was fantastic in the warm water!

Next stop was an overnight at Manicheel Bay on Cooper Island. A huge change since I was last here 10 years ago. Gone is the little boutique and beach bar replaced with true resort style buildings. Now sporting two bars and restaurants as well a very large boutique. All very nicely done!

Overnight we got our first taste of the weather that was to come for a few days. The evening air was hot and humid so we went to sleep with everything open – not 2 hours later, the skies opened up and the rains came full force. This is kind of like the instructions on a shampoo bottle rinse, wash, rinse – repeat as needed! I think it was Mother Natures way of trying to keep us on a three hour watch schedule of getting up to close everything then open it all up when the rain stops because it is way too hot inside the boat.

Our next stop was to the famous Baths. Dinghies are not permitted on the beach as the waves get very large and landing / launching on the beach is treacherous – entertaining to watch others but treacherous!  So now the dinghy is tied to a mooring line away from the beach and you need to swim from there to the beach – well landing with mask and flippers is no less treacherous than with a dinghy. Poor Maryse crash landed and then the waves tossed her along the rocks , needless to say the rocks won out and she had more than a few scratches. Anyway it did not stop her from exploring the cool paths between the huge boulders, that remain after the softer lava rock eroded over the years gone by.  We did find a nice long path to return to the beginning without having to go back against the flow of visitors. 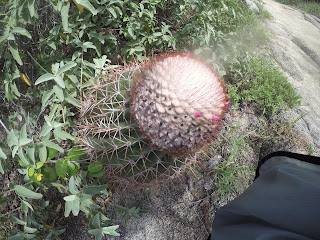 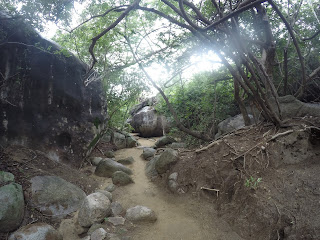 As we were on to or next overnight destination we were once again rained upon for the entire trip to North Sound in Virgin Gorda.


We did  get a treat of seeing the Maltese Falcon – probably one of the most famous sailing yachts in the world .  I hear that is winters in BVI and summers in the Med and is in  charter most of the time – I could not even imagine what a week on board is worth! 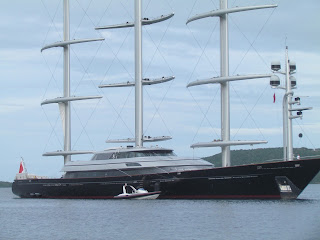 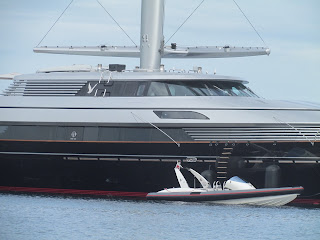 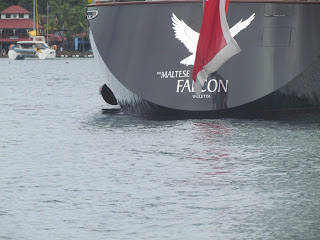 The next day it poured rain all day so we just chilled out on board. The rain let up in time for us to hail the free water taxi to take us to dinner at the Bitter End Yacht Club. This still is a special spot  with SOOOO MUCH character. The word around the bar with a few long term customers , is that the resort is not doing financially well.  That is sad….

Despite the rain we headed out the next day – not even enough wind to sail so we motored all the way west to Great Harbour  on Jost Von Dyke.

We wanted to go to Foxy’s but the downpour just kept on coming! We did a little Rescue 911 for a couple of German visitors – engine wouldn’t run and then broke an oar – it was the “going around in circles” that caught me eagle eye! – a tow to shore and all was good again in the bay!

One of the Star Clipper Tall Ship’s “Royal Clipper” was anchored on front of Great Harbour for the night – the music was more than loud well into the wee hours of the morning! I gather the guests enjoyed themselves even if we were caught halfway between the music from Foxy’s and the music from Royal Clipper – not exactly a duet!

Jean’s last full day on board so we motored up to Sandy Cay for a swim and then we motored to Soper Hole West End . Jean treated us to a wonderful dinner at Pusser’s Restaurant where I introduced him to a Bushwacker as dessert! – he is sold now!

Dropped Jean off at the ferry for his trip to St Thomas to catch a flight home to the cold and snow of Montreal – thanks Jean for your help in successfully executing the big jump – at least for us – from Portsmouth VA to BVI.


Off by ourselves we had a fantastic sail to Norman’s Island and a mooring ball in the Bight at Normans Cay.

We took the dinghy over to what used to be a Pirate beach bar complete with thongs and bras stapled to the roof rafters. Clearly the restaurant and bar  haved moved way closer to Up Scale!


In the morning we were to say the least VERY SURPRISED to see that Coral Beauty – Jacques and Daniele from Plattsburgh City Marina were on a mooring ball a hundred yards away!!! We snuck up in the dinghy and knocked on their hull – now the surprise was shared! Turns out that it was Jacques’ birthday today. We enjoyed a great afternoon and dinner with live music with them.  We both shared our ‘adventures” in reaching BVI – enough to fill the evening!

The next morning we caught up with our Rally friends Cafe Latte, Jean and Yolene and snorkeled the caves at Norman’s Island / Treasure Island of Robert Louis Stevenson fame. We dropped the mooring ball and had a great 3 hour sail to Trellis Bay.  A culinary delight of a dinner at De Loose Mongoose Resto Bar – great burgers!

We stay put during the rain again for another day a Trellis Bay …… out of here Tuesday!
Posted by Merrill at 1:33 PM