May Update - The season starts to come to an end....

May started out with a wonderful albeit quiet sail from Fort de France north to St. Pierre. It was the first time we were able to anchor so close to the town dock, clearly the season is winding down and there are much fewer boats about.

On the Monday morning it was our day to visit DePaz Rhumerie. We were VERY surprised to find EVERYTHING is closed except for two restos! Oh yes … this is France and today is May Day! We couldn't even clear out of customs – they were closed also! We will have to wait until tomorrow. 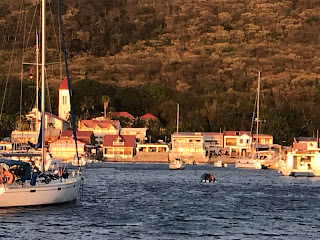 I was at customs at 8 AM Tuesday morning to get our clearance out. By 9:30 we were anchor up and on the way north. The bay was super calm but it was far from that once we passed the north end of the island. We were in 8 to 10 foot swells and 20 knots of wind. It turned out to be a very salty sail to Dominica but LOTS of fun. Tried our hand at fishing and caught a barracuda ... now that was a challenge to get rid of him in the bumpy conditions.  Somewhere swimming around is a large barracuda with a major hole in his top lip!

We picked up one of the new (since the hurricane), mooring balls from Sea Cat and then set about getting checked in with Customs and Immigration at Roseau - boy this is far from yacht friendly but we were able to get our clearance in and out all in one visit, at the ferry dock. This means that we don’t need to go back to customs before we leave for Guadeloupe.

Roseau before the hurricane and after the hurricane leave a lot to be desired. Lots of folks milling about but nobody particularly doing anything. The town center is predominantly very run down but there is a fantastic new grocery store on the waterfront that was well stocked and bright. Us boaters get pretty excited when we find a great grocery store!

The next day, we thought we were going to have to motor from Roseau all the way to Portsmouth which is about a 20 mile run north - well we were wrong! We ended up having anywhere between 3 knots and 34 knots of wind! This is what sailing on the leeward side of the islands is like! Wind velocity and direction is always a surprise. Sailed a good way, motored some - turned out to be a good sail!

Arrived in Portsmouth and tied up to a mooring ball with Providence (Martin). At the same time we got an island tour all lined up for tomorrow morning with him. 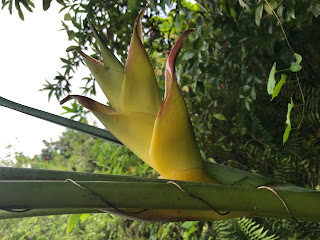 We had a great tour with Martin. Left Portsmouth early morning and drove south along the coast to just before Dublanc, turned left and headed up into the hills. After parking we had a 40 minute walk through rivers and dirt / mud trails to get to Syndicate Falls. 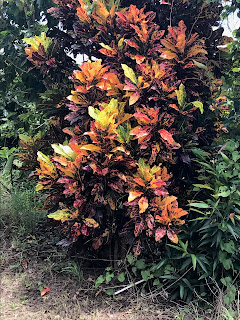 On the walk up to the falls we came upon a litter of puppies and they were SO excited to see someone! For some reason they really really liked Maryse's shoe laces ... she couldn't take a step forward with at least 3 o4 4 firmly gripping her laces in their teeth! Was too funny! Of course as Maryse tole them No No No ... they all listened so well ..... not!

We have done a number of tours in Dominica but this is the first time we have been here. It was spectacular - the falls drop about 80 feet into a pool that you can swim in. 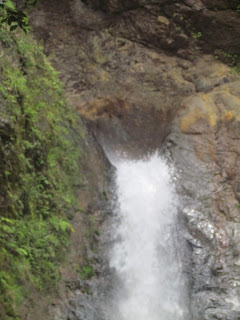 Martin is a botanist and is also very knowledgeable about traditional medicinal plants and herbs. We had quite the educational tour as well as we wandered along the trail. 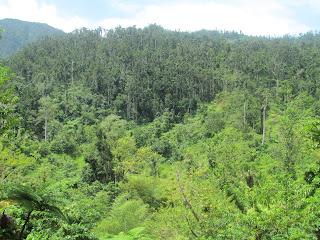 A quick visit to Dublanc on the way back to Portsmouth. This little fishing village was almost completely destroyed in the hurricane of 2018. These folks are resilient!

Time to hurry along, so the next day we left Portsmoth and headed for Les Saintes in Guadeloupe. A group of 5 little islands at the southwest tip of Guadeloupe. We were expecting a really rough ride today to Les Saintes but it turned out to be a beautiful sail in 20 knots on a beam reach. It is tough to get a better sailing day than this! WOW Beautiful We knocked off the 22 miles in just less than 3 hours – that’s an average speed of 7.3 knots … not shabby at all! We tied up to a mooring ball and then got the outboard back on the dinghy – scooted in to town for a delicious lunch and walkabout. Being Sunday afternoon no customs clearance but they are not too difficult – we will get it done in the morning.

This is probably one of our most favourite spots in the islands. Great restaurants and Maryse’s all time best spot for accras de morue or cod fritters with hot sauce.

Friends of ours rented an electric Green Machine cart and we did a super tour of the island and got to places we had not seen before – we don’t mind a little hike but some of the hills are brutal in the heat! The Green Machine was a luxurious way to see the island!

Also visited the eastern shore of the island and clearly the sagassa weed problem continues – it was almost knee deep along the beach and so very stinky! As this weed decays in the sun and heat, the gasses it gives off are extremely toxic – enough so that it removes the finish of metal hardware and can cause major health issues even at concentrations of 3 PPM!!

The following day we cleared out of France for an early morning departure - our destination is Deshais at the northwest corner of Giadelopue. The winds were a little bit all over the place so we motored, sailed and motor sailed our 33 miles today. After arriving in Deshais it took us at least 4 or 5 tries to get a good anchoring spot. Deshais is known for having a deep anchorage and poor holding and to make matters worse, the wind really swirls around a lot so the boats are not always all in the same direction. So that what looked like a safe distance between us and our neighbor – after 15 minutes, we are way too close for comfort! 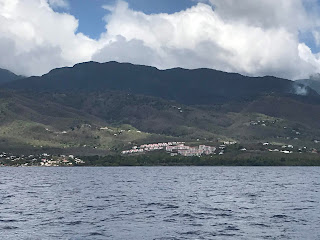 We had the opportunity to meet a young couple from the UK in their 32’ Contessa sailboat Jingo, that were heading back home after 2 years of cruising in the Caribbean. We had left them with a few treats and as a thank you they left us with a great little sketch of Ambition and a card. Thank you Mo and Mattis. Fair winds for your travels home! Life is all good. 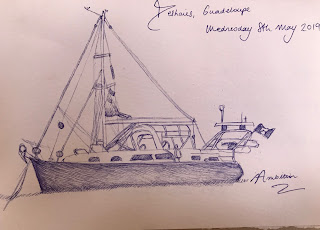 An early morning departure from Deshais - up anchor at 6:15AM ugh! It took a few miles but the wind filled in and we couldn’t have ordered a better wind! Ambition bounced along in long swells and 15 knots of wind at 75 to 90 degrees apparent. At one point a sailboat behind us really started to catch up with us quickly ….. as all sailors know, two boats going in the same direction - is a race! We had our genoa out completely, the staysail and the full mainsail – short of rigging up Maryse’s bikinis; I could get any more sail out! I adjusted sails, hand steered so that we were efficient navigating the swells and the other boat was still gaining on us. After about and hour, when he was almost right behind us I think he finally turned off his motor because he disappeared behind us within 15 minutes.

We arrived in Falmouth Harbour, Antigua and then 2 hours later the other boat arrived … I love the speed I can get out of Ambition when I try. We averaged 7 knots for the trip to Falmouth, dropping the hook at 12:30 - a beautiful sail. Cleared customs in English Harbour and we are back in very familiar territory again – it is like coming home!

After a couple of days in Falmouth and the obligatory stop for dinner at Paparazzi Pizza – the best wood fired oven, thin crust in the Caribbean. The resto is owned by a gentleman from Pierrefonds – two blocks from home – it is a small world sometimes.

May is always a short month for us on board Ambition as at least half the month is set aside for getting Ambition all ready to be pulled out of the water.

Thanks again for following along with our beautiful winter in the Caribbean. Once Ambition is all tucked away for the summer we will be flying home to catch up with family and friends and a bunch of projects to keep us busy.