Another day of surprises!

This morning got off to a great start when I received an email from Garmin stating that they were going to cover some of the costs incurred in determining that our small chart plotter was defective! YEESSS thank you Belinda for going to bat for us!

At lunch time we were scheduled for a "lunchtime hang" ... no not what you think! Pick us up out of the water - wash the bottom, check the zincs and drop us back in.

As we were motoring over to Port Annapolis our new large chart plotter went blank?????? I was a little concentrated in getting us in the travelift - deal with it later.

Out of the water we came - Maryse and I had a little bet on how much Ambition weighed with lots of water and fuel and causing stuff on board - I had figured 45,000 lbs Maryse guessed 46,000 - Maryse wins but Ambition tipped the scales at 50,000 lbs - our own little Miss Piggy! OMG 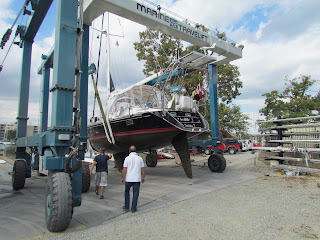 Our first surprise of the day turned out to be the vanishing antifouling paint. As they washed the hull, the barnacles showed up as did the lack of black paint. Ambition had 1 coat of blue followed by two coats of black. As the pressure washer removed more fuzzy stuff from the bottom, everywhere where the blue showed up ..... the barnacles had moved in. I am not pleased with myself! Obviously I had applied the black coats too thinly in the spring.

At 1 PM the yard said that they could block the boat, sand it today and paint Tuesday.


At 3:30 we were still in the slings - executive decision - we will be in Tortola BVI in 3 weeks. Rather than miss the start of the rally we will deal with another haul-out in BVI and repaint her there. SPLASH we are back in the water.


I was able to turn the chart plotter on but the screen remained black. A quick hour on the phone with Garmin and a few troubleshooting tests and Garmin agreed to ship me another chart plotter. This is the second in two weeks - and we have two on board! Now that each has been changed, I hope that we will be over this hurdle once and for all.

Well the boat score today is one step forward and two backwards - kind of like sailing isn't it! The desired destination is not always attainable - stuff that is not in our control sometimes makes choices for us.

Tuesday we are scheduled to have the repairs completed on the headstay and get the mast all tuned and then we will say goodbye to Annapolis and head for Portsmouth VA. I have supported the Annapolis economy enough I think to allow a graceful exit! Here's hoping I don't break something else too soon!
Posted by Merrill at 6:10 PM