Our sail from Roseau Dominica to St-Pierre, Martinique was a delight! The winds were favourable. It is interesting how the wind and seas behave when you are in the lee (protected side) of an island. We left Roseau and the winds were almost calm – not even worth putting the sails up. By the time we reached the end of the island the wind had picked up to 15 knots steady with gusts to 20 and seas reached what was expected – 8 to 10 feet. Ambition with a reef in both the genoa and mainsail heeled at 10 degrees and scooted along at 8 knots and at times almost 10 surfing down the backside of the larger swells.

Five hours after leaving Dominica we were in the bay of St. Pierre. The guide book and Active Captain ( a social media driven cruising database) both mention how difficult it is to anchor in St-Pierre.  The water is very deep right close to shore and there are very few sandy spots in which to ensure the anchor has a good hold. The beachfront is almost 2 miles long and we slowly made our way down the beach trying spot after spot without success to get a a spot we liked. Finally found one and set the anchor, just to be sure I jumped in with mask and snorkel – it was OK but not great – decided to chance it so we called it done!

We left Ambition and headed into town to clear in through Customs and do a little bit of shopping. In true French style, we cleared customs by using a computer terminal in a restaurant to fill in all our particulars about the boat and our passports – printed out the sheet, the owner then signed and stamped the paper and bingo we are now free to wander about Martinique!  What a process!

Off to the store to find some baguettes, cheese and wine which has become quite a staple on board yummmmm! 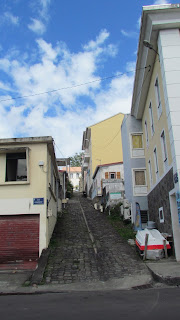 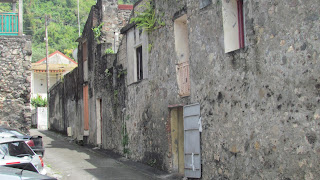 Back into the dinghy and back to Ambition – OH NOOOOOOO, she is nowhere near the spot we left her and in fact she is only 200 feet away from another sailboat. This is NOT good. Fire up the engine, and immediately start to retrieve the 150’ of chain that we had laid out on the bottom.  The hunt resumed for better spot. Further down the beach the water is only 20 feet deep instead of 35 so we try again to get the anchor to hold. This time it works like it should do and after a quick swim, Maryse confirms in fact that the anchor has all but disappeared into the sandy bottom – ahhhhh we will sleep well tonight!

St-Pierre  is at the base of Mt Pelee  and was where the French settlers killed off all the remaining Caribe Indians. The story is told that before the last Indians were slaughtered, they uttered horrible curses asking for the mountain to take revenge. St-Pierre was the original capital of Martinique and in the early 1900’s had become a substantial city of 30,000 inhabitants and the center of culture and commerce of Martinique. In April of 1902, Mt Pelee gave warnings that the volcano was becoming much more active and small eruptions buried a couple of estates killing the inhabitants. The politicians and business leader of the time made a concerted statement to the people that there was nothing to be feared and that evacuation was not required. Added to that the politicians were anxious for the upcoming elections where the blacks were challenging the status quo.  On May 2nd 1902 the volcano erupted with substantial force (said to be 40 times that of the explosion at Hiroshima) and the heat and gasses killed all but 2 survivors within 3 minutes. 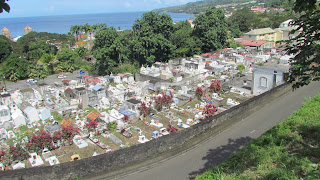 There remain many ruins of that day as well a monuments attesting to the catastrophe. Many building use the ruins as foundations and walls for the newer construction. However, the capital never recovered and today St Pierre is home to less than 6000 people, the capital is now Fort de France. 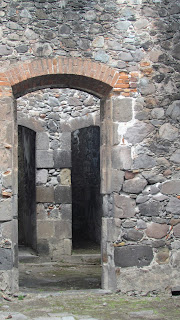 We took a short hike up the statue that overlooks the town.

As we left St Pierre we had a beautiful view for the first time of the top of Mt Pelee ..... WOW