We made a quick two day stop in St Pierre on our way to Marie-Galante as we need to clear out of Martinique even though we are going to another French island – it is a different department and hence the check out and check in requirements. While in St-Pierre we had two items on the to do list. Firstly was the least attractive so we got that out of the way first – I need to see a dentist as I had an infected gum that needed attention. It turned out that I was already on the road to full recovery but it was reassuring to get that from the pro! A little 35 euro bill and out the door a happy man!

The second was much more appealing which was to hike up the Depaz Rum factory.  I hear that they have rum tastings…. yyyessss. It was a good hour and half walk up the hill to the factory in the morning, which is better than doing it in the afternoon! The Depaz rummerie is a substantial business and it is set in a beautiful hillside location. 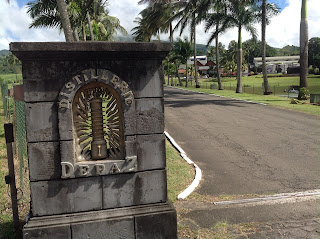 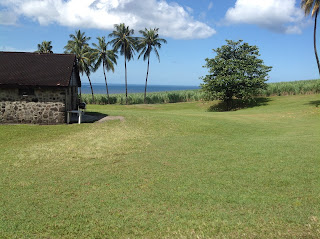 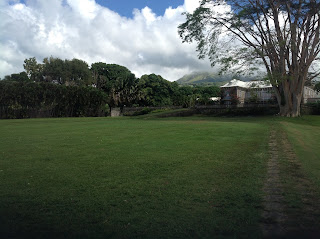 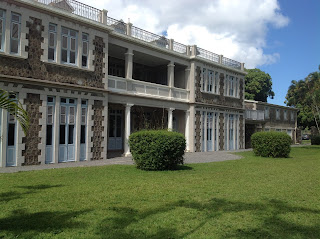 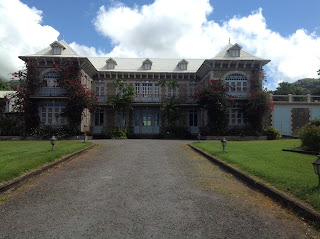 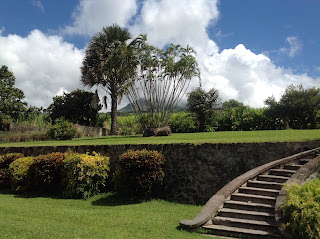 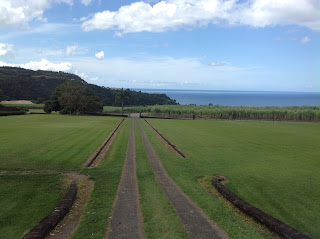 The self-guided tour was interesting and the rum tastings were super – white rum versus the various ages of rums that they produce. We left with a couple of bottles in the backpack, happy with our purchase.

The next morning we left St-Pierre for the 50 mile run to Portsmouth, Dominica as an overnight stop only, we didn’t even clear into customs, just picked up a mooring ball for the night and left early the next morning for Marie Galante.

Marie-Galante is an island to the south east of Guadeloupe and it is as different from both Guadeloupe itself as well as many of the other islands in the area. The island lacks any actual mountains and is relatively speaking, very flat. The major advantage is that growing sugar cane on the flat is much easier to harvest mechanically than on the hillsides. For the island residents, sugar cane continues to be the main industry on the island. 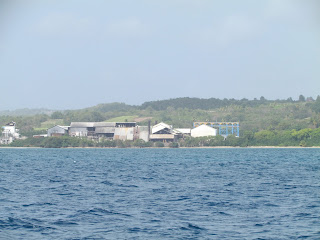 We arrived from St-Pierre Martinique and Dominica and since there is only one port to do customs – Grand Bourg, then that was the spot. Big mistake – there is a half marina – some docks for ferries, a few docks for fishing boats and one for private yachts but  no room for us. The guidebooks say that anchoring in the large marina is possible - the posted signs say otherwise. We anchored just outside the marina but the ocean swells were unbearable as Ambition rolled 20 to 30 degrees each side in the swells. Up comes the hook and we head north for calmer waters. We pulled into Bay St. Louis – ahhhhh this is better. Dropped the hook in 15 feet of clear water with no swells. We will figure out the customs thing in the morning as we have 24 hours to clear in.

Monday morning and customs is open so we need to do the paperwork stuff if we want to be legal. A cab driver on the ferry dock offered to take us on a return trip to Grand Bourg for 20 euros. The other choice and you will not believe this … we rented a scooter – not the 120cc but the BIG ONE the 135cc for 28 euros for the day. Well Maryse is now officially the Biker Babe on the back! 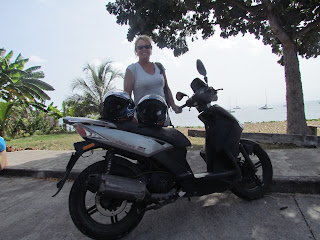 It was a little shaky at first as we wobbled our way down the street but we eventually got in tune with the leaning bit to get around corners. We were not exactly the “picture of safety” on the roads but we did have helmets and no flip flops on our feet! On a positive note – I never lost Maryse off the back and we never tipped over going slowly even when doing a U turn! Visions of Mr. Bean come to mind! 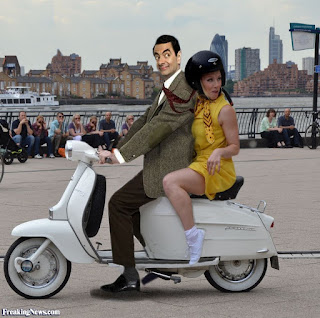 Anyway, once in Grand Bourg it took a bit of detective work but we did locate the customs office in a non descript building on a side street with a side entrance then upstairs. A very accommodating agent allowed us to both clear in and out (later this week) at the same time, which saves us from having to return later to clear out, before we go to Antigua. 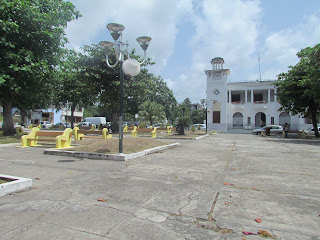 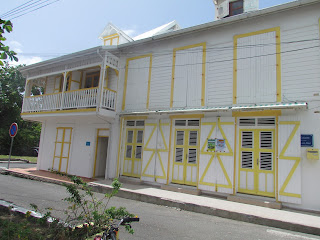 A quick stop at the tourist office and away we go!
Marie-Galante was always a very significant cane sugar and rum producer. We visited the site of one of the largest producers of the slavery period.  Murat at one point they had 1200 slaves working at this one location.  Today all that remains is some ruins of the period and the chateau /museum. 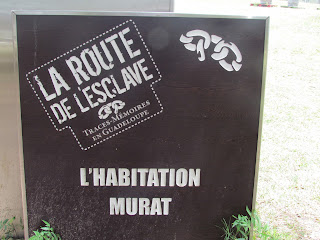 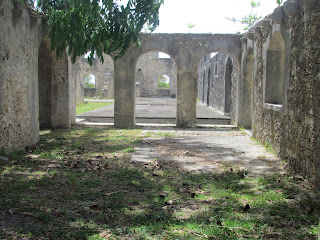 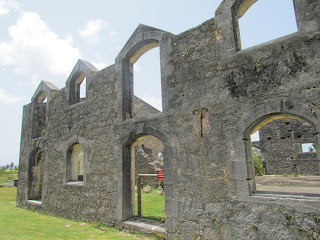 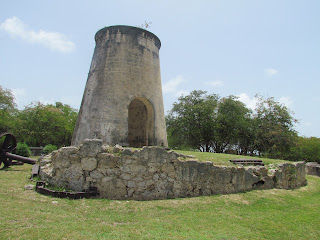 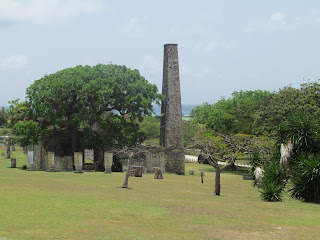 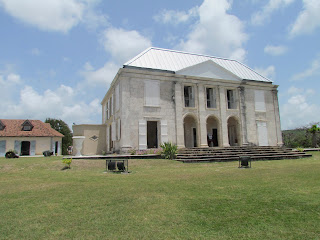 Found a great little resto on the waterfront for pizza at Gino Pizza and yes Gino is from Sicily so the pizzas were good – not as good as the cold Caribe beer but good!

We spent the rest of the afternoon scootering around the island past cane fields galore and endless white sand beaches.  This really is a beautiful little island in the sun. Not a lot of pictures as shooting with the scooter running was not a good idea! 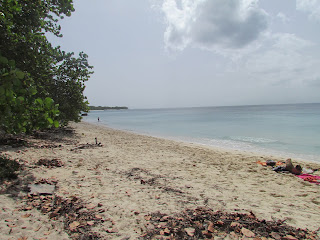 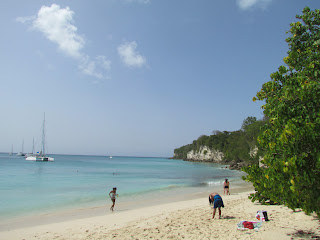 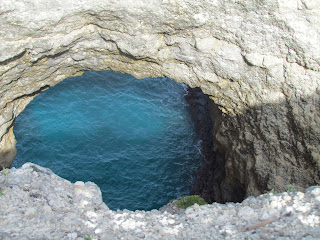 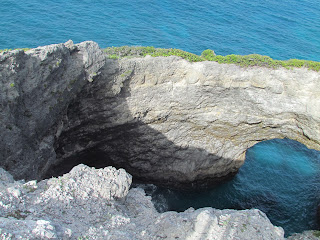 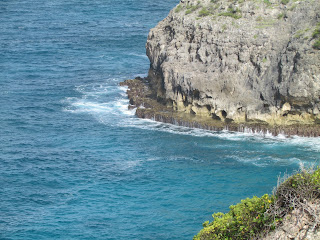 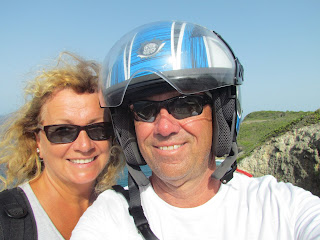