We left Catskill after completing the installation of the boom and reconnecting all the mast wiring. It is interesting that when we have come up the Hudson River it can be done in one day from NYC to Catskills. The same is not true for the opposite direction! Never been able to do it in less than 1 ½ days. A good lesson in tidal currents – hard to believe that more than 100 miles upstream at Albany, the Hudson River has a 5 to 6 foot tide! 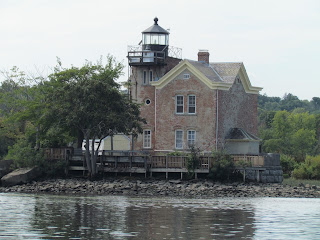 We passed a couple of great lighthouses on the river – same style as those on Lake Champlain. 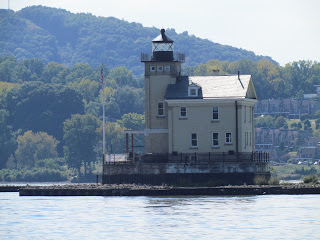 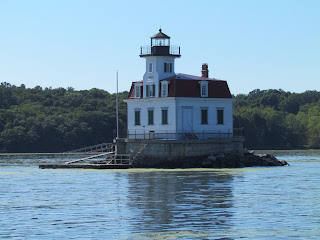 And some of the homes were very spectacular! 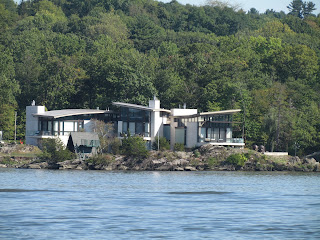 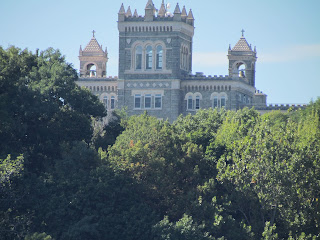 We made our planned destination at Newburgh NY and anchored just as the sun set opposite Bannerman Castle Arsenal – Maryse is really not comfortable with the energy of this place!

A quiet overnight except for the freight rains that seem to go by every hour!

Up at 5:30 and underway at 6 – within a couple of hours we passed by West Point Academy, officer training for the Army. A more than impressive facility!

And of course what would the Hudson be with out a bit of commercial traffic – the pictures may not do it justice but this tug is pushing 8 barges at once.

The Tappan Zee bridge – the first of many NYC to NJ bridges is under construction – 2 years ago it was barely started when we came up the river. Hope our Champlain bridge will be built as quickly. 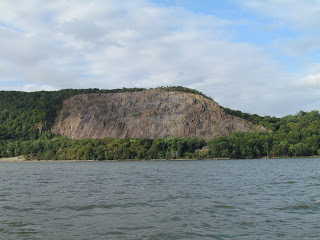 We were fortunate running through NYC on a Saturday – the river traffic was FAR LIGHTER than what we experienced on a weekday. 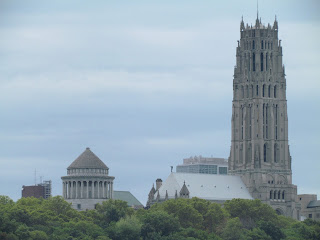 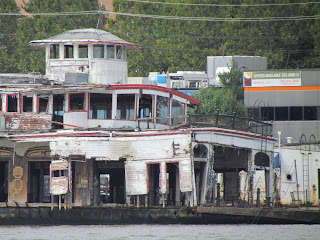 Arrived at Sandy Hook NJ early afternoon and finished off a bunch of items on the to do list – disassembled the two genoa furlers and gave them a much needed maintenance and greasing  - no more squeaks and grinding – should have done this a LONG time ago. Also installed the gas shock support for the  boom – excellent as now it holds up the boom instead of the topping lift – just checking stuff off my list at a furious pace!

I installed the sails and sure enough on the large genoa  when I tried to furl it, I had installed the line to roll the sail up backwards – ended up wrapping the halyard at the mast head badly enough that Maryse needed to get out of her comfort zone again and winch me up 65 feet off the water to the top of the mast to sort out the mess. All is good – untangled and the furling line corrected – both sails properly installed – officially a sailboat again. Duly noted which genoa rolls in which direction – do not want to make that mistake again.

The weather forecast for Monday afternoon is not good and will stay not good for at least 3 or 4 days. We decided that we would take advantage of the little window of opportunity and make a dash for Delaware Bay. We left Sandy Hook at 11AM Sunday and pointed south.

The wind was only 5 knots so we continued motoring and ran for the rest of the day and the overnight arriving at the mouth of Delaware Bay at sunrise – a run of about 120 miles. Since the weather was still holding we turned the corner and headed north up the bay.

It is a long 90 miles with LOTS of commercial boats (if you make this trip remember that you MUST monitor VHF 13 to communicate and understand what the tankers are doing).

The overnight forecast called for horrible storms so we reserved a spot at the Chesapeake Marina about 2/3 of the way through the C and D canal. A great spot and we got in at high tide so we had about 8 feet of water – when the tide went out we settled about 1 foot of our keel into the soft mud.  Bed sure felt good after an all nighter.

The next morning Ambition had a well deserved wash down with fresh water – she was looking a little neglected after all the boots on board for the re-masting  and the one gazillion squashed spiders – we have been infested since Plattsburgh and Maryse is on a mission to kill each and every one of the buggers!

After the wash down we left the marina and made a short 20 mile run to Sassafras River in Maryland – an absolutely idyllic spot – anchored on the curve of the river all by ourselves – life just doesn’t get better!

This morning we motored in some very heavy rain down the bay towards Annapolis. This gave me a good chance to practice with the radar since visibility was less than ½ a mile – very happy with the radar image now being perfectly aligned with the chart plotter. We are able to pick out the buoys and the huge barges which is a good thing – neither of them are very forgiving!

After 40 miles we arrived in Rhodes River where will be attending a Seven Seas Cruising Association conference and GAM for the next 3 days. We are anchored well up in the river and it will be only more beautiful when the rain stops and the sun comes out. There are already more than a dozen boats anchored here and I suspect many more to arrive in tomorrow.
Posted by Merrill at 5:39 PM