After all our goodbyes and dinners with family and friends it was time to drop the dock lines and start our next voyage south. We left Plattsburgh City Marina Monday Sept 19th late afternoon, there was only one or two other boats on the lake - it is fun to have it all to yourself sometimes. We anchored in Sled Runner Bay ready for an early start in the morning.
Ugh ... a 5AM alarm clock - the is almost just like work! The anchor was up and were putting along by 6AM - hot coffee and tea in the cockpit as the sun came up - the lake is covered in a light fog. Winds are calm and no waves make it a wonderful ride as the boat is very rolly with the mast down.

The day turned spectacular on the lake - we passed under the NY version of Champlain Bridge and the monument alongside. This really marks the end of the sailable part of the lake because it starts to get skinny south of here. 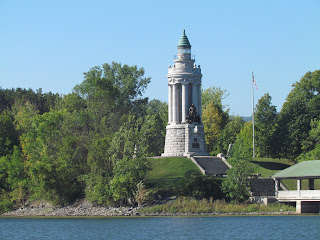 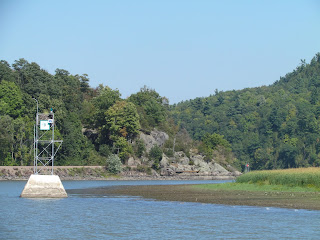 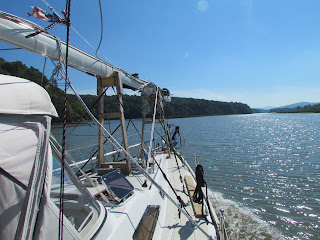 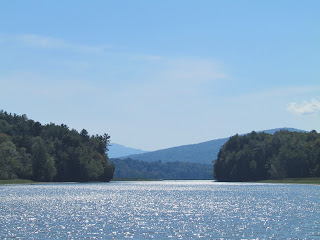 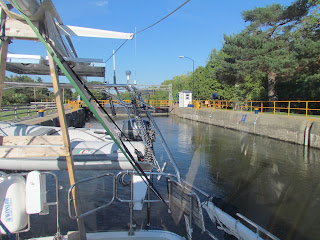 We arrived a Whitehall early afternoon so rather than stop there for the night, we pushed on further through lock 11. A couple of pictures of the canal as well as lock 11. 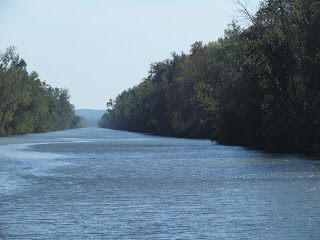 We got to lock 9 about 15 minutes before closing time at 6PM but our VHF calls to the Lockmaster went unanswered. We were hoping to pass through the lock and tie up on the south side as the guide book says it the better of the two. Rather than "portage" Ambition around the lock, we tied up to the north approach wall. A super quiet night and very scenic. When we got up in the morning we could not even see the bow of the boat due to the morning fog. 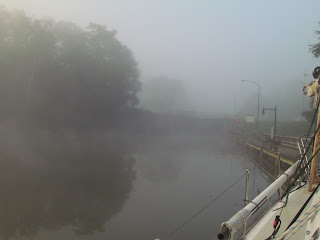 We were blessed with some fantastic displays of nature in the fog as well as what spiders on speed can accomplish in one overnight! 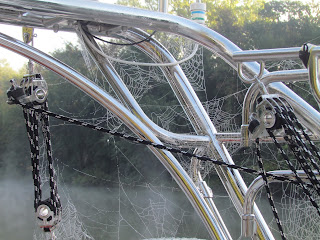 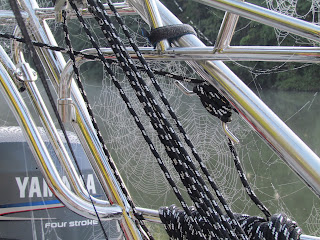 Well at least nothing will fall overboard! The spiders have made sure to tie everything down in every possible direction! 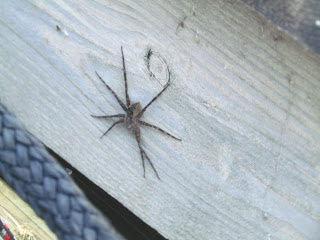 Speaking of spiders - take a look at this monster! Just to put him in perspective ..... he is on a piece of 2 X 10!!!! He covered way more than a third of the plank!!! Maryse was so very grateful of me pointing this out to her right after breakfast!

The got strong enough to burn the fog away by 8:30 and we headed into lock 9. We mentioned to the lock master that we had wanted to spend the night on the south side but just missed him last night. He responded that perhaps it was good fortune for us as they have been visited recently by a black bear on the south side - the trees have had the back clawed off .... OMG!!! And I thought the monster spider was a threat!

The rest of the locks all the way through lock 1 to Waterford was uneventful and beautiful. We are so fortunate for the great late summer weather we are enjoying. 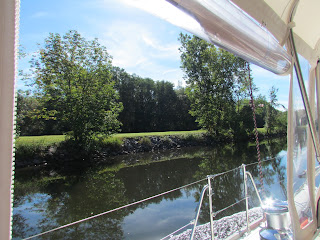 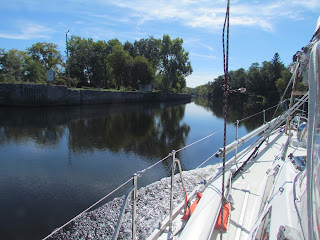 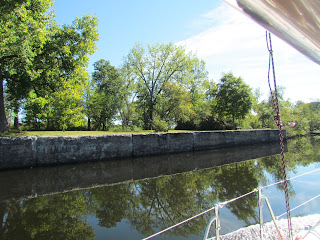 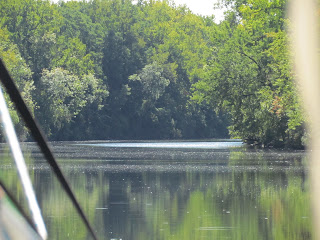 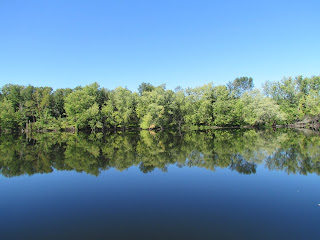 Now  you can appreciate when we said it was calm ... IT WAS CALM ...not even a ripple in the water made these two photographs really beautiful. Almost mirror images in the water. 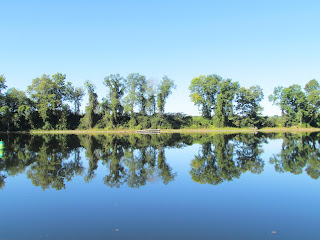 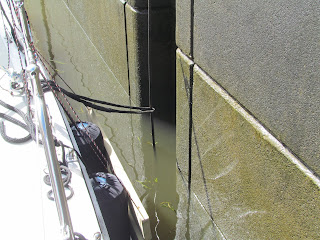 Here is the technique we use in the locks - tie a dock line from the mid cleat around the post or wire imbedded in the wall. Then just use the boat hooks to push the boat off the wall - I do cheat sometimes and use the bow thruster to move the bow where I want it! The fender boards save the fender covers from getting all dirty from the lock walls. Remember your work gloves to push off the wall sometimes :-) 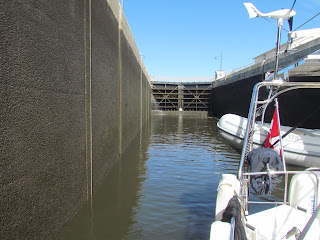 Once empty - this is what a typical lock looks like - we drop down in this case about 16 or 18 feet. We didn't have to share a lock once on this trip. It is rather impressive when you think that each cycle of flooding and emptying a lock consumes about 1 million gallons of water! Ambition thanks you!