It was good to finally get out of  St Martin lagoon. St Martin however was not so eager to let us go. When we arrived in the lagoon, there are more than a few shallow spots and we did touch bottom a little on the way in.  The notion of actually installing buoy’s  ALL the way through to identify the channel apparently is still but a plan – ½ are installed but that is it. I was told that I had cut the corner so upon leaving, took what I though was a better route out. Well I really stuffed Ambition hard into the mud and sand bottom. At 50,000 lbs  plus, stopping quickly even from a slow speed does not occur instantly! I tried to reverse out, I tried to wiggle back and forth. I only made it worse. Two other boaters came to our assistance and with both of them pulling and Ambition at 3600 RPM we slowly got back into deeper water.
By this time however, we had missed the afternoon bridge opening and I needed some time to gather back together my captain skills!
The following morning, Maryse and I took the dinghy out and with a tape marking at 7 feet, we used a bunch of abandoned boats as reference points to find enough water to get Ambition out of the lagoon. We left well in advance of the afternoon bridge opening and following our sounded route, we made it out of the lagoon without any bottom contact  at all….. YYEESSS!!
We topped up on fuel $45US for 35 gallons and refilled the water tanks 165 gallons for $20.  A much better cost than what we paid in some places in BVI.
We hustled off to Anse Grande Case to participate in the Tuesday night Carnival. Grande Case is renowned as the food center of St Martin. There is ABSOLUTELY no shortage of restaurants to choose from. We met Caffe Latte there and followed their lead as they had been here the week prior. WOW what an adventure. The streets are lined with vendor stalls selling some beautiful jewelry, art works, food and of course fashion wear. Dinner was OUTSTANDING and the wine awesome. The French Islands really do food right!

The following morning we left St Martin and sailed to Ile Fourchue. A fantastic sail with beam winds of 15 to 20 knots and ocean swells of less than 6 feet, Ambition was loving the ride!

Ile Fourchue is part of St Barth but is privately owned but uninhabited. You can tell that it was an island created by a volcano, where now the western side has completely eroded leaving behind a beautiful bay protected from swells. Since it is also part of the St Barth Maritime Reserve we gladly pick up one of the free mooring balls for the night. 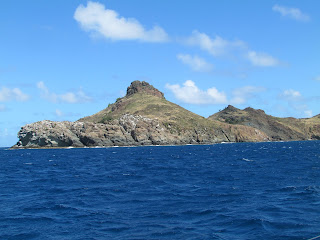 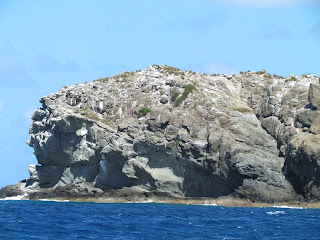 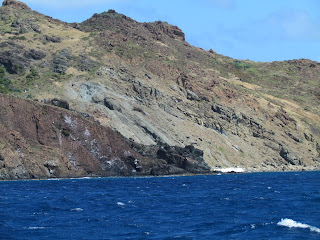 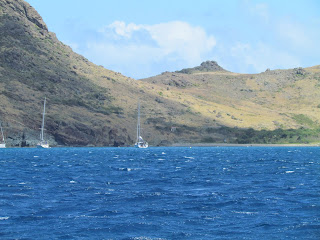 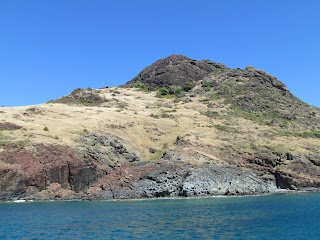 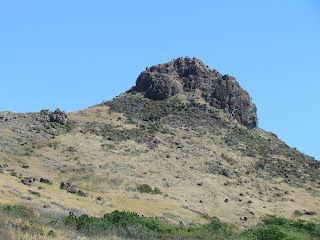 The story was that there were many goats here that eat everything. When all was left was the prickles on the plants - they eat them too! That was their undoing and only the tough made it through coughing and hacking! They were removed from the island and probably became goat stew with prickles!
Lucky for us the island has recovered and grasses and trees have regrown. 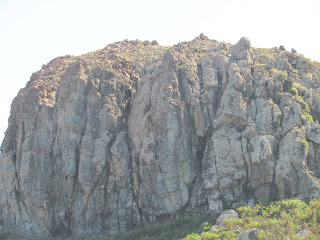 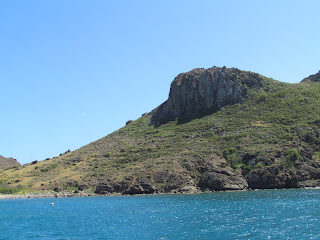 Tomorrow we head for St Barth and Port Gustavia to clear customs.


Life is so good onboard!
Posted by Merrill at 1:38 PM