Our sail to Montserrat was to say the least entertaining if not wet! Our first tack upwind was with a heading of Cancun Mexico! This was looking to be a LONG sailing day! By 9 AM the squalls showed up - the wind didn't change direction but instead of the 15 knots predicted - we were now dealing with a steady 24 with gusts to 30!
Not one to give up (not that we had any choice!) we stayed the course and slowly but surely the wind direction led us in a big arc - now instead of missing Montserrat on one tack by 15 to 20 miles, we were off our waypoint by 2 miles! You gotta love sailing where the destination and the route is ALWAYS an unknown variable!!! After about 6 hours we closed in on the volcanic island. The closer we got, the more variable the wind became and also stronger - a tack was in order - by the time the boat settled down after the tack, we were headed back from whence we came!  Hummm Maryse had had enough of the rail in the water so we ended up motor sailing and finally just motoring the last two miles to Montserrat.

Today, Montserrat has virtually no bays nor marinas to provide good anchorages. Since the main town of Plymouth was buried by the volcano,  Little Bay has now become the primary port and customs office. There is a tiny bay - good for about 6 boats max within 1/4 mile north of Little Bay called Rendezvous Bay - we dropped the anchor in 40 feet of water thinking that we were better protected from the swells here than in Little bay - the night would tell!

Dropped the skiff in the water and off to customs we went. As in all of the islands, the customs, immigration and port authority processes are always random and different! Part of the charm the islands gives us! Arriving at the port pier - the one for inter-island cargo vessels, we quickly realize that this is "our tie-up" OMG .... the swell rolling through here is two to three feet! Bravely we leap and scramble up the concrete structure - not pretty but it worked! Stop in one building to use their computer to fill in the SailClear process - turns out we didn't need to do that - we should have started at the Customs desk in the building down the way .... Great got customer done and off to immigration in another building for some more official document filling in and stamps! back to Customs to complete the process ...... I am thirsty!

On the "beach" are four very pretty restaurants - all new and nicely designed - only two are open for business! We pick the one that has customers (my criteria for bar and resto selection!) and order up a couple of cold Caribs.....life is better already! Since is is now late afternoon an early supper is decided upon of burgers and ribs and two more Caribs!

Skiff back to ambition and realize that this anchorage is going to be a little rolly tonight! Well as it turned out sleep was an option as I was up regularly checking to see if we had drifted back into the Caribbean Sea and turning off the anchor alarm as we swung around on the 175 feet of chain that we had let out. We didn't drag but it was a long night! The next morning Caffe Latte who got here a day before us decided to change to Little Bay to see if it was less rolly - news report was yes it was better. Up comes the anchor and away we go to Little Bay, Anchor set this time in 35 feet of water - all is good.

Figuring that I would need an afternoon nap, we decided to knock off a few boat projects and chill rather than do a island tour today.

Well our night was certainly less rolly than the previous night. The previous night I obviously had selected the "Auto Roll" button for bed, as every 30 seconds or so you were rolled onto your other side - in those old motel rooms it would cost a quarter to have a vibrating bed and here we got auto roll for free!!!

Caffe Latte pulled out early this morning for Guadeloupe looking for sleep - their boat rolls much worse than ours. We loaded our stuff int the dinghy and headed to shore. The waves at the dock were even worse today than two days ago! It was quite the gymnastics to firstly get out of the dinghy and then how to tie it up!

As we were walking to the taxi stand to look for tour guide we were called at through the fence offering a tour. I had a name of a gentleman that was recommended by the Cruising Guide so passed on the offer. Well ten minutes later we discovered that we had just missed our guide by a few minutes as he had left with another group. Timing is everything so back to Alfred we went!
Alfred's old Toyota was not quite the taxi I had expected but it would do. Off we went for a US$120 tour for 3 hours. After a few minutes of navigating wicked steep hills up AND down, I decided that I was not going to wear a seatbelt - the end needed to happen quickly if the brakes failed! 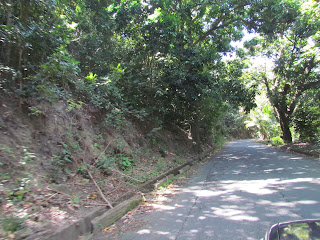 Montserrat prior to the volcanos had a population of 12,000 folks, today they number only 4500. As we left Little Bay we noticed that all the building were relatively new and large and all government buildings. Alfred explained that the British government had given Montserrat millions and millions of dollars to help rebuild their capital in Little Bay. Ironically as it may seem, the Prime Minister of the day also owned a construction company that received permission to build all the needed government buildings. Many of the building still today are more than 1/2 empty. Amazing that no matter where you go, there will always be a few who will take financial advantage of a situation that detracts from those who really need the assistance.

Our next stop is the MVO - Montserrat Volcano Observatory who are charged with the daily monitoring of the volcanic activity. In the event of another eruption, they would sound the alarms that are dotted around the area.

From here we can clearly see the devastation that the eruptions had on the people. Alfred our taxi driver was one of those who lost everything that first day. I made the slip of stating that the government now owned the lands that were covered by the mud and rocks - he very quickly responded that he still owned the land and that he was just not allowed to use it for 20 years! I apologized for the mis-spoken words! 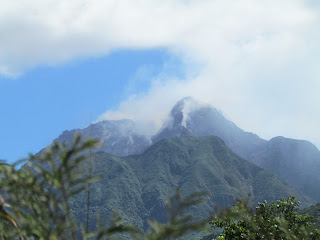 In the Exclusion Zone V all the homes have been abandoned or destroyed - no water, or electricity is available. 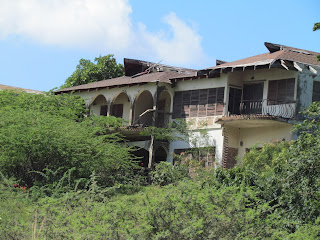 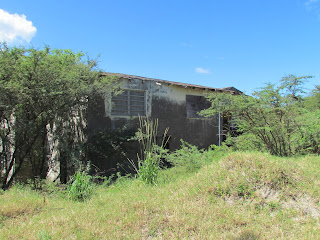 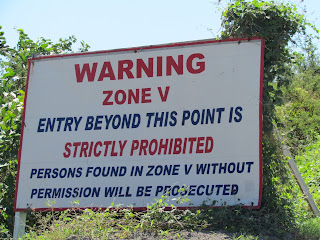 Even the one hotel we visited shows the signs of the mud / ash that spewed down the mountainside that day.

On a more positive note, the one export from Montserrat is sand and gravel that is collected from the flows from the volcano. Again the government gave the "mining" rights to a few gentlemen and the government receives on a small payment per ton of material shipped out. Huuummmm history repeats itself again.

After our tour and the conversations with Alfred it is clear that the people of Montserrat have been deceived by 7 successive governments in 20 years. Little money if any has gone into a benefit for their future. They desperately want the ability to receive cruise ships but lack a port and even a breakwater to protect them in port. There are only 15 taxis in Montserrat (compared to 400 in Nevis) so even if they could get cruise ships to stop they have no infrastructure to receive them. They have asked for mooring for private yachts in the two bays but so far that has not come to fruition. The few people that remain are survivors and deserve a better future for themselves and their children.

Ok I am off my soapbox and political speeches now - I am ok! 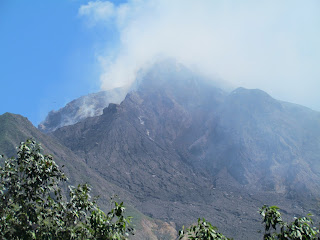 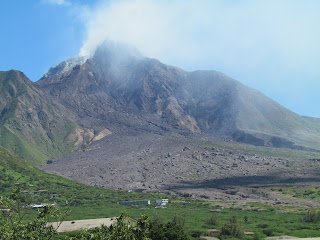 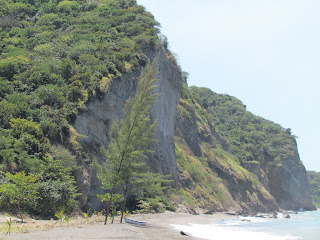 We stopped by Customs today - Sunday, to clear out and it seems that the information provided when we cleared in was not correct. There is a US$100 fee to clear out on a Sunday - so we will be back at 8AM in the morning to get our clearance papers. This will give us a later start than planned - such is cruising!

Tomorrow after clearing out, we will be heading the 41 miles to Guadeloupe - Dehaies Bay. 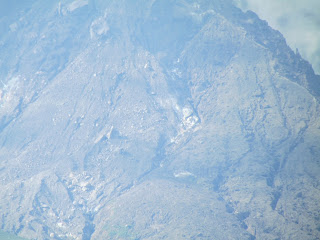 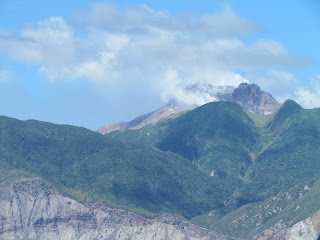