Well our ride from Anse du Columbier to St Kitts started out as a great sail. As predicted the winds were about 15 knots and we were on a course with the wind at 90 degrees – a comfortable and fast ride. No more than an hour into a 6 hur sail, the squalls appeared – the wind was topping out at 30 knots and the direction had shifted 70 degrees south which meant that instead of a calm ride it was now a trash to windward – wet and uncomfortable. To make matter worse, the best course we can sail will not get us to St Kitts any time soon! I love sailing – where the destination is always a variable and the voyage uncertain! We put the genoa away and motor sailed for an hour but then even that didn’t work so put the mainsail away and just motored to wards St Kitts. With no sails up to stabilize the boat, we are back rolling around in 6 to 8 foot ocean swells …… ugh!

Within an hour of reaching the northern point of St Kitts, the squalls left and the original wind reappeared. Out come all the sails again and back sailing along as the day had started! All is good again on board except the interior is upside down from being tossed over on our sides a few times! Nothing broken!

St Kitts is one of the island chain that the Cruising Guide call the “Islands That Brush the Clouds” Saba, St Eustatius (Statia), St Kitts, Nevis and Montserrat. These islands have much higher mountains and they often have a cloud hat sitting on them. That also causes much more precipitation and therefore the islands are very lush and green. 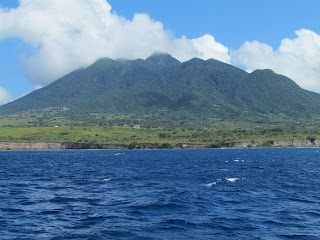 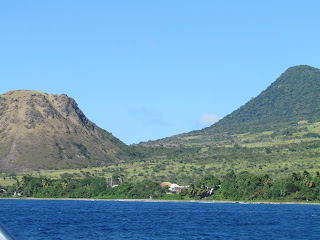 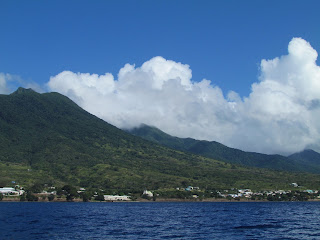 As we sailed down the western shore of St Kitts towards Basseterre we clearly can see the old sugar plantations with the tall chimneys still standing. 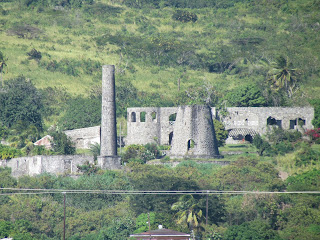 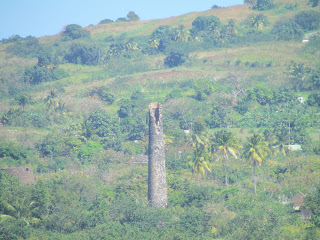 The Brimstone Fortress stood out on the hilltop commanding a perfect view of the surrounding waters. 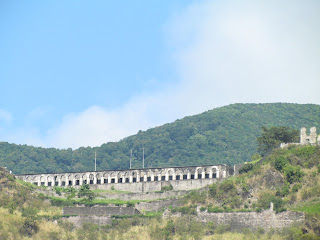 Arriving is Basseterre there was no available space in the marina, which would been a nice treat after a bumpy ride, so we anchored in the bay  just noth of the marina – no other boats were there and Maryse was questioning whether we should be here or not – if nobody else is here???? Within 20 minutes of us anchoring, the bay had filled with 6 other yachts!  At least we now have company!

Next stop is Customs, where much different than St Barth, here the Customs officer inserts 2 sheets of carbon paper (when was the last time you used carbon paper!) – press firmly and fill in all the regular details of the boat and our passports.  Pay the fee of EC$ 20 to arrive in St Kitts. Off to Immigration in another building at the cruise ship docks – they are closed …. we are then sent to the Port Authority where I thought they would do the Immigration papers but no, since we are anchored in the Port, we have another set of papers to fill out for just being in the port! A Port fee of EC$20 paid and told to return to Immigration the next morning. If nothing else, this does create employment!

There are two HUGE cruise ships in town today and the entire town is buzzing with activity.  There is a shopping mall type set up where the cruise docks are and there must be a dozen shops selling jewelry at 90% discount (huummm) t shirts and trinkets from China but the truckload. The cruise ship folks fill the shops and streets.
By 5PM the entire place started to empty out as everyone headed for the cruise ships. Shops started to close up, the bar we were at having a beer and internet, had a last call and turned off the internet connection at 4:30!
We headed out to find a restaurant open or even someone to tell where we might find one! The guard at the marina told us that they locked the marina gates at 7PM,   which would have left us on the outside of the fence and the dinghy on the inside. Good thing Maryse had thought to ask! We headed back to Ambition with a plan to return in the morning for Immigration.
Both Cruise ships left the dock before 7PM and with them gone the breakwater they had provided left also! The bay became noticeably more rolly but nowhere near as bad as St Barth.

Sunday morning by 9AM we were back at the cruise ship dock area – the only thing moving here was the birds and one or two security people. A real ghost town completely shuttered – even the casino was locked up tight! 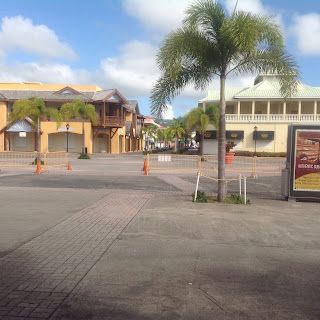 After a short wait we did meet with Immigration and filled out more forms and stamp passports. 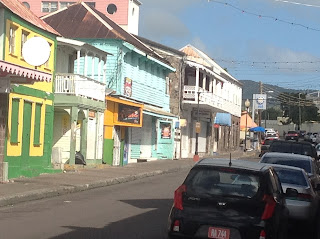 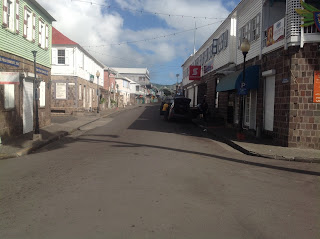 We took advantage of the quiet of the Sunday morning for our walkabout through town. All the shops were closed not even a coffee shop open. A real collision of both British and French architecture and city design.


They even have in the town center a circle called The Circus modelled after Piccadilly in London. All the activity that we found was around all of the many churches. The folks all impeccably dressed for the morning masses and congregations. Very impressive indeed! 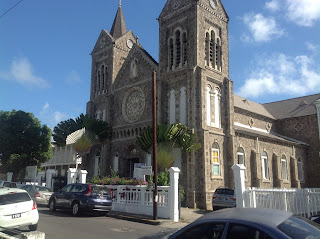 I really had my heart set on visiting the fort that we had seen from the water yesterday and with a bit of hunting we found a taxi that would provide a city guided tour, a trip to Brimstone Hill Fortress. Our guide Rolly  was a wealth of information as we toured his home town. St Kitts remains a very religious island and everyone is still respectful of the Sunday as a day off for everyone – except a few taxi drivers!

St Kitts was the first British captured and controlled island in the Caribbean in the early 1600’s. French settlers joined with the British and ended up dividing the island giving the French the north and south ends and the British controlling the center sections! Soon after they massacred  in one day over 2000 Carib Indians at a canyon now called Blood Point – you can just imagine where it got its name.  The British and French spent the next 150 years fighting each other until the Treaty of Versailles  gave total control to the British and the French packed up and left for friendlier islands!
On to Brimstone Hill Fortress which, in 1999 was granted status as a UNESCO World Heritage site. There is only one narrow and winding road up to the fort and it quickly becomes apparent that the restoration of this fort has been exceptionally done even though work continues in many areas.  We spent at least 90 minutes wandering through the fort. AMAZING!!!! 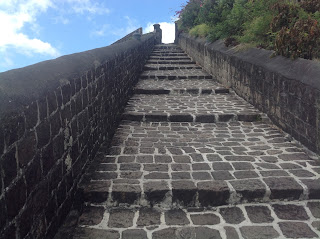 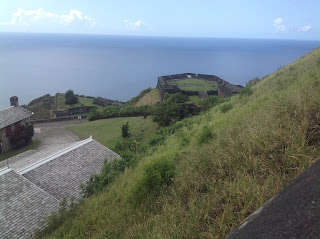 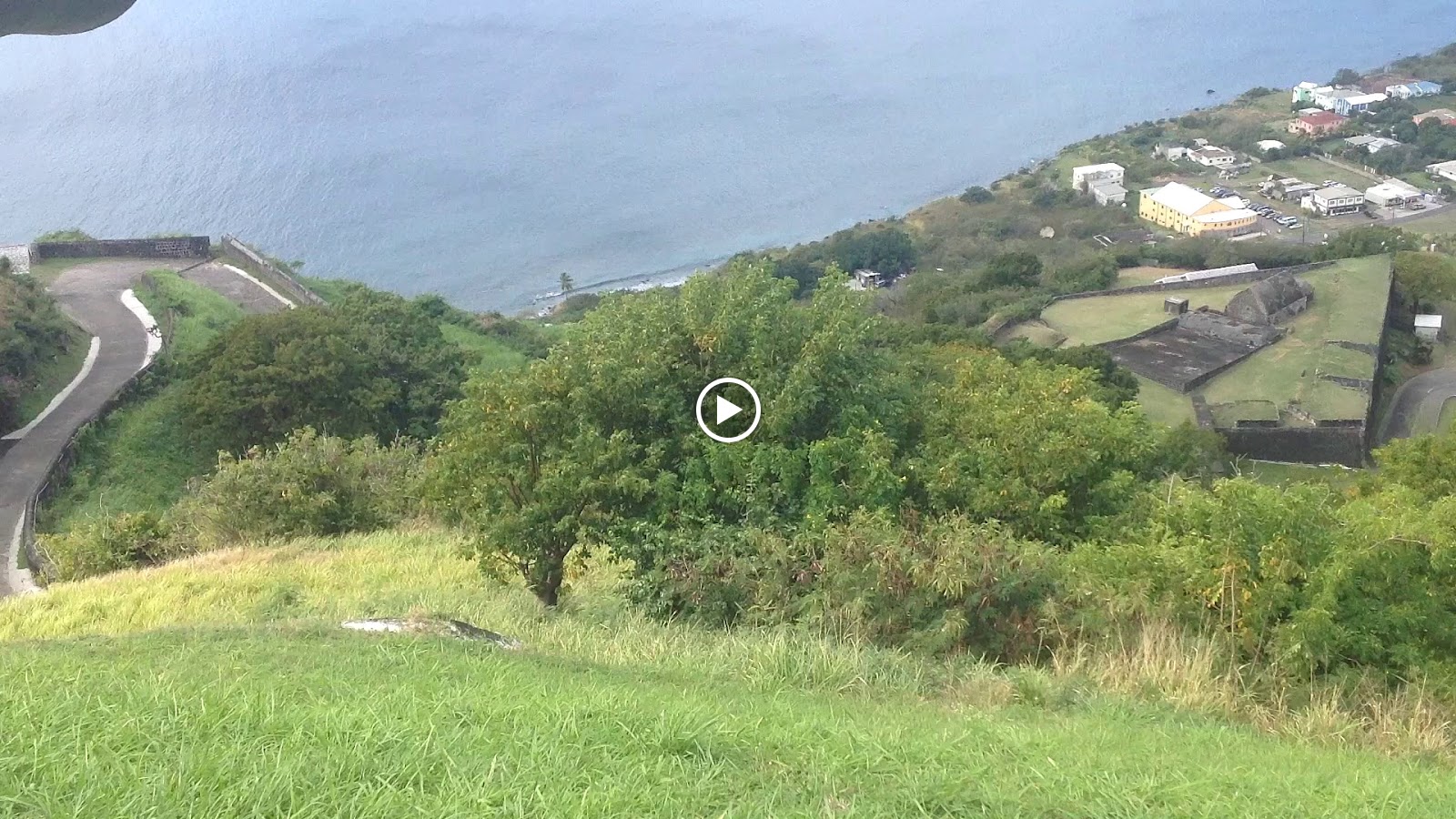 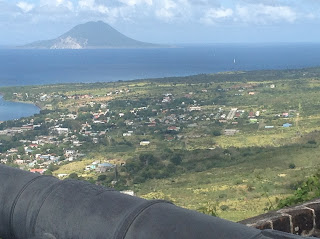 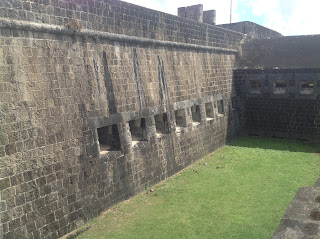 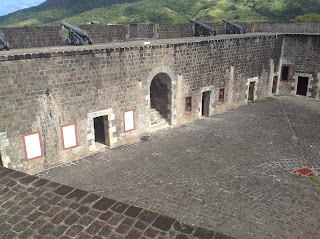 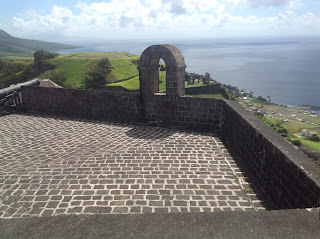 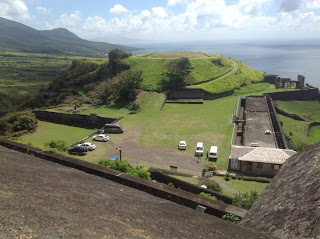 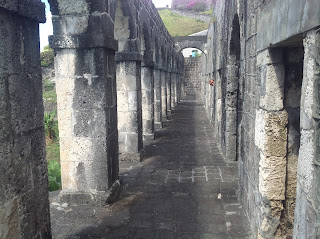 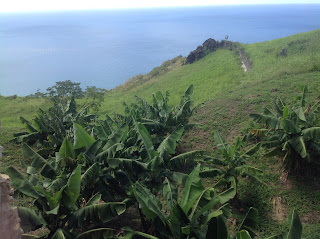 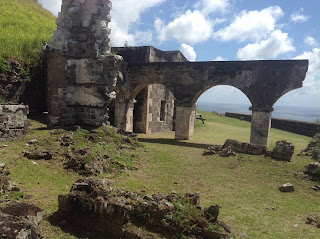 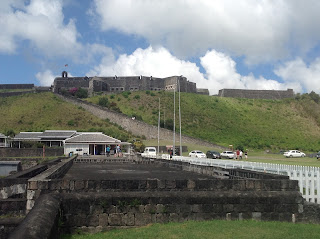 Rolly dropped us back at the marina and we gladly paid him the US$60 plus tip that he charged us for the 4+ hour tour.


Back on board, we pulled up anchor and headed further south – from the water it is evident that the southern end of the island is populated by more wealth and newer homes.  Can’t help but notice that since this end of the island is not blessed with the tall mountain peaks, the hills are no where near as green as the northern end . We dropped the anchor again in White House Bay – nicely protected from ocean swells and once again we cross paths with Caffe Latte!